According to the World Economic Forum, in their “Future of Jobs 2020” report, it is estimated that by 2030 more than 85 million jobs could go unfilled because there aren’t enough skilled people to fill them! The tech talent gap is wider than ever! There is a significant talent deficit, where there is a high demand for professionals with technology and digital skills and a shortage of supply to meet that demand. According to Balderton’s analysis,...

According to the World Economic Forum, in their “Future of Jobs 2020” report, it is estimated that by 2030 more than 85 million jobs could go unfilled because there aren’t enough skilled people to fill them! The tech talent gap is wider than ever! There is a significant talent deficit, where there is a high demand for professionals with technology and digital skills and a shortage of supply to meet that demand.

According to Balderton’s analysis, the supply only seems to be meeting the demand in the UK, France and Germany; given that these three countries in Europe employ two-thirds of all the people that work for tech startups. The UK and Germany are the countries with the highest number of professionals with scientific-technological training and the UK alone employs 31% of those who work for startups, underlining the extent to which the UK dominates the European tech scene.

In the following article we will analyse the main IT hubs in the world, particularly in Europe in Spain. A quick guide to identify where to look for the best STEM professionals

Despite the high demand and well above average salary for data scientists and machine learning engineers in the UK, research suggests that the number of AI jobs available in Britain was still six times higher than the number of interested candidates. In Spain, there is also a high demand for digital and tech professionals, in particular, IT profiles. In fact, the information and communication technology (ICT) sectors in Madrid are the ones that generate the most job offers, 38.3% of the total. Additionally, according to Indeed’s data, it is clear that within Europe, Spain has had the greatest share of tech job postings since 2017. The significance of this is that not only, is the relative share of tech jobs in Spain far higher than other European countries, but also that there is a high demand for these specific tech workers, where tech’s role as a driver of the job market has elevated importance.

In addition, the wage for digital and tech professionals is 18% higher than the average salary offered in Spain, according to an Adecco report. But despite this positive trend, there is a significant lack of skills among the candidates needed to fulfil these positions. Although the supply not meeting the demand is a major problem, it is not all bad news. As an example, the number of developers (analyst-programmer) has increased by 4.2% throughout Europe, while in Spain it has grown by 15.1%. The case of Barcelona is especially relevant, which has 72,500 professionals of this profile, which makes it the second city in the Top 30 of the European cities with the highest number of developers.

Existing and Emerging IT Talent Hubs Outside of Europe

Top Existing IT Hubs (outside of Europe): 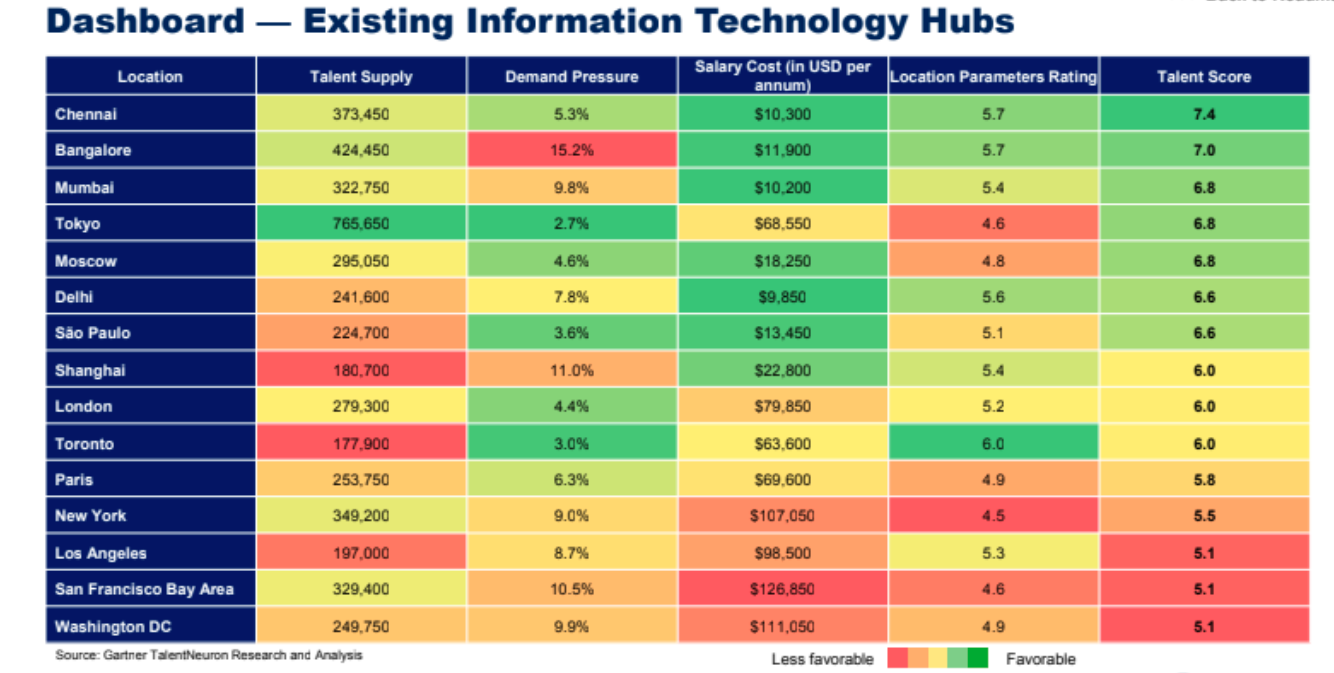 Top Emerging IT Hubs (outside of Europe): 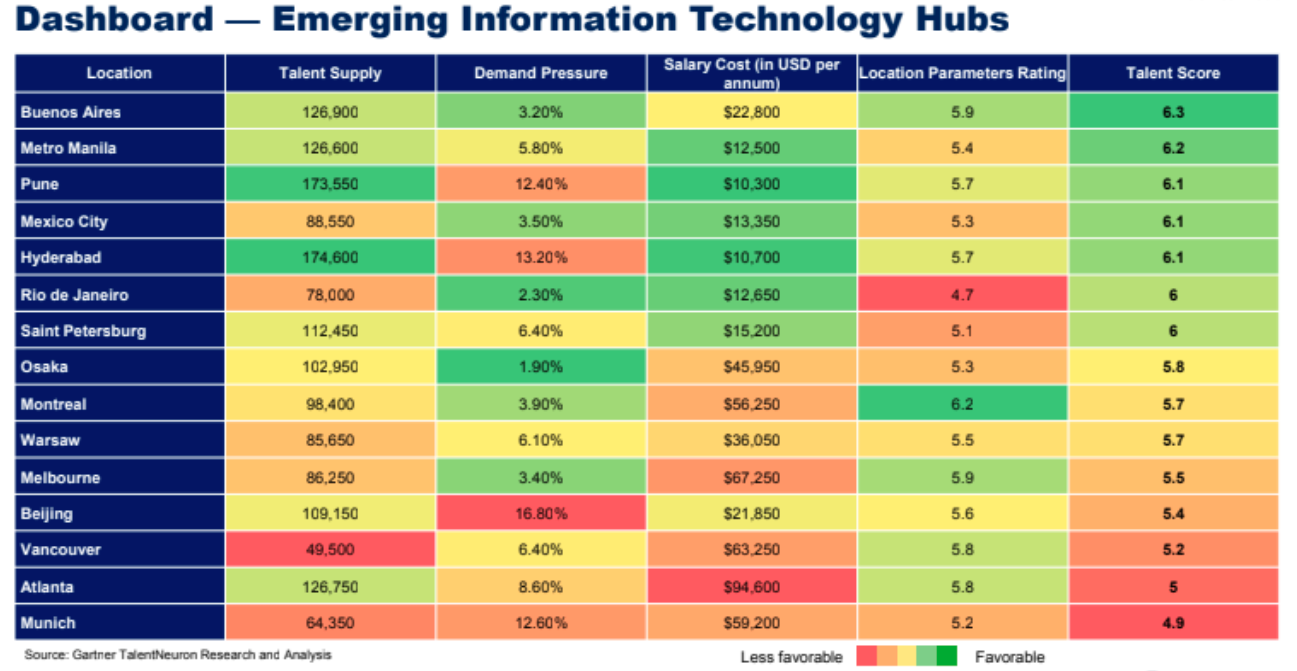 The fastest growing IT Talent Hubs in Europe are as follows:

Spain, with an increasing number of IT talent hubs

Madrid and Barcelona are the two cities that allow operating at the lowest cost among the ten IT talent hubs in Europe that were analysed; a group that also includes London, Copenhagen, Munich, Dublin, Paris, Amsterdam, Berlin and Stockholm. According to Miquel Martí, CEO of Barcelona Tech City “Barcelona is now well positioned, as it is among the 30 most important technology hubs on an international scale.” Moreover, although the top existing IT talent Hubs are Madrid and Barcelona, the top emerging IT talent hubs include Malaga, Valencia and Bilbao. Others that are also emerging but not as rapidly as the aforementioned are: Almeria, Seville, Segovia, Cordoba, Extremadura, Alicante, Ceuta and Melilla.

In addition, a report highlights that Spain is in a great position to provide technological talent to tech companies. Moreover, in terms of investment in technology start-ups, Spain is in sixth position, behind the United Kingdom, Germany, France, Sweden and Switzerland. On many occasions, startups dedicated to emerging technologies, such as blockchain, IoT, 5G, Big Data or artificial intelligence, do not get the support and financing they need, but with new initiatives, such as the Telefónica Open Future accelerator which has just been launched, this will add the efforts of eleven Hubs spread throughout Spain to help emerging companies with the most important projects.

Despite the large number of job opportunities and the high demand for technology talent across Europe, there is a shortage in the supply of specific technology positions. Profiles which, on the other hand, are essential for the growth of companies and on which thousands of projects depend. The lack of qualified professionals is already a strategic issue, rather than a Human Resources issue, and the shortage is causing losses of millions of dollars every year. The fact that the future of companies also depends on their ability to attract and retain the best professionals means that they must rethink their talent acquisition strategy towards a more global and digital approach in order to gain speed and efficiency.

And this is only possible thanks to technology and the use of data intelligence to identify the best professionals ahead of the competition.

At Catenon IT, our area specialising in the recruitment of technology, digital and innovation profiles, we are able to develop a digital and global strategy, taking advantage of global talent hubs, and simultaneously, use data intelligence to identify the best professionals and answer the big questions in IT recruitment.

Get Innovative to Uncover Top Talent When You're Hiring