No one can deny that there is an underrepresentation of women in executive roles and C-Suite positions. Despite the significant progress that has been made, women’s representation at the executive level of organisations remains troublingly low. According to a report by Cranfield School of Management and EY, the percentage of women holding FTSE 250 executive director roles was just 11.3% in 2020. Why is this? Unfortunately, it is not solely the glass ceiling (the invisible barrier... 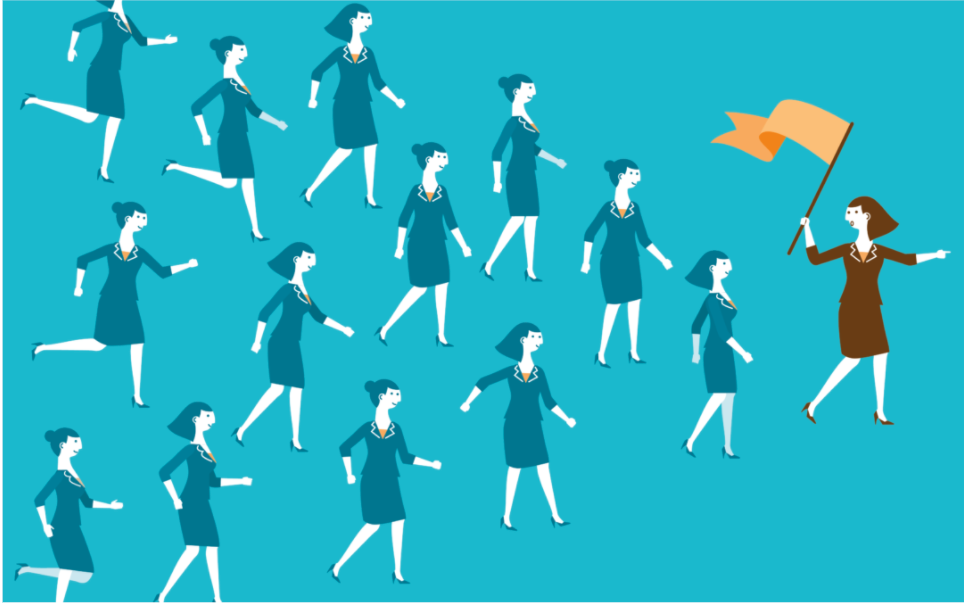 No one can deny that there is an underrepresentation of women in executive roles and C-Suite positions. Despite the significant progress that has been made, women’s representation at the executive level of organisations remains troublingly low. According to a report by Cranfield School of Management and EY, the percentage of women holding FTSE 250 executive director roles was just 11.3% in 2020.

Unfortunately, it is not solely the glass ceiling (the invisible barrier which impedes women from accessing the higher echelons of a company) that continues to exist, but also female leaders continue to face societal, historical and self-imposed biases as well as employment inequalities which can cause them to avoid stepping further up the career ladder. What’s more, the blame should not lie entirely with men, given that, be it by unconscious bias or predisposition both male and female managers are twice as likely  hire men over women.

Another crucial factor that we must take into account is that women tend to ‘lean out’ of the recruitment process much more than men. More specifically, women are far more likely than men to decline applying for an executive role if they have been previously rejected for a role with that employer. Men and women who apply for positions at an executive level can experience the same hiring process very differently. So, companies should seek to address and combat the factors such as belonging uncertainty, often triggered by previous rejections and unfairness during the recruitment process, that typically prevent women from putting themselves forward for executive roles, as this will enable these companies to access to the highest-quality candidate pools.

Diversity means understanding that each individual is unique and recognising our individual differences. These can be along the dimensions of race, ethnicity, gender, sexual orientation, socio-economic status, age, physical abilities, religious beliefs, political beliefs, or other ideologies. Hiring more women in leadership positions, women in technology as well as women in leadership at tech companies will add real value because it will bring a combination of many different perspectives, talents and new approaches. Studies have also shown that a workforce that is diverse in many different cultures, backgrounds, and gender tends to generate increased creativity and innovation, faster problem-solving, better company reputation, not to mention increased company profits. Therefore, the role of women is crucial in the digital transformation of companies.

According to the “Global Female Leaders” study (a common study of Harvard Business Review) women are well prepared for a digital future. They have the personal and professional skills that are needed to succeed in a digital surrounding and have a strong focus on communication and networking. These women feel comfortable with new technologies, trust data and their analytical instincts. They are not afraid to make unpopular decisions and are willing to invest into innovative corporations to enlarge their success.

What can be done?

It is a challenge that companies need to start facing head on and orient their recruitment strategy towards diversity objectives. For example, blind and anonymous applications need to become the norm, as women are 25-46% more likely to be hired with blind applications. Other best practices include building sponsorship networks for women, giving them the right exposure and skills to climb higher up and including more men into these conversations can help in welcoming more women in the C-Suite.

Additionally, more steps that can be taken to remedy the problem at hand are firstly educating students, especially young girls, about technology and its importance in shaping the world; ditching damaging dialogues which perpetuate the stereotype that tech is a man’s world and instead empowering women.

Increasing visibility of female role models in the industry can also raise awareness about the importance of women in C-Suite positions and inspire and give hope to young females who aspire to follow in these role models’ footsteps.

In 2019, Catenon developed an initiative, called Women Ahead, to highlight the experience of women who, due to their professional or personal experience, have stood out in their respective fields. For example, Estefanía Narrillos, Finance Director for Iberia and Maghreb of Groupe PSA (manufacturer and distributor of Peugeot, Citroën, Opel, Vauxhall, DS cars), and Director in several companies of the Group. Estefania has an extensive track record in management positions, she has led the reorganisation of the finance function in the Iberian Peninsula and Maghreb, as well as numerous company creations, mergers and restructurings in the countries in her area of responsibility. She also sits on the Board of Directors of several companies, including PSAG Automóviles España.

Additionally, Maite Ballester, Managing Founding Partner at Nexxus Iberia Private Equity, is another inspirational woman that Catenon had the pleasure of speaking to; whose interview will be published in the next few days. She is an advocate of women in positions of power and has found empirical evidence from a study by Mckinsey, that clearly reflects that top quartile companies that have a significant percentage of women executives and directors in their management teams tend to perform at least 21% better results than the bottom quartile.

Businesses need to target their recruitment strategy towards women

At the end of the day, ensuring that women get a fair voice in the C-Suite is indeed a complex process and despite all the progress that has been made in recent decades; the tech industry still appears to be a“boys only” club, so until complete parity is achieved there is still always more that can be done to level the playing field.

While the aforementioned best practices alone will not increase the number of women in C-suite positions, they offer a variety of steps which all organisations can implement in order to boost the number of women applying for those senior-level roles and orient their recruitment strategy towards diversity objectives. Finally, women who have made it to the top must try to systematically build a female talent pipeline to the C-Suite; as Sandy Carter, Vice President at Amazon Web Services said, “When you advance, reach behind you and take another woman’s hand. Bring her with you.”

Talent Hackers, Catenon's nodal technology platform for the activation of IT talent, wins the 1st EDITION OF THE INNOVARH AWARDS!